Lenny Henry in the Slums

Comedian Lenny Henry has done a great deal of work for charity over the years. Through Comic Relief, he has travelled to some of the poorest parts of Africa to help raise money for those living there.

This time was different, though. He found himself in Kibera, one of the largest and poorest slums in the world, near Nairobi, Kenya.

Kibera houses approximately one million people in a one and a half square miles. Most of these people live in extreme poverty.

The slum is appallingly filthy, but Kiberans somehow manage to keep their homes spotlessly clean. They mostly live in corrugated iron shacks, and one toilet may be shared by anything up to fifty families. 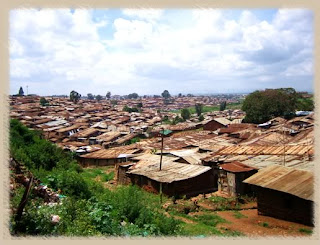 Along with three other celebrities, Henry went to live in Kibera to raise awareness for Comic Relief. He stayed with a family of orphans who were looked after by their 16-year-old brother, the eldest of five.

Henry started by saying he had seen places like this many times before, but having spent the night there, said he had never seen anything this bad. He described it as "hell".

The children lived in one room, next door to an open toilet which regularly overflowed, causing raw sewage to flow through the children's room.

Henry broke from the rules of the documentary to use his own funds to buy the children another house to live in.

It was very moving to see Lenny Henry crying at the sight, and smell, of the children's living conditions. However, shame on Comic Relief for finding them and leaving them there to film. Why didn't Comic Relief move those children out of there? This is very exploitative.

Shame on you, Comic Relief. Shame.

I have never been a fan of reality TV, and this show did not make a fan of me.

In the end, all four celebrities helped the people they were staying with, and I found this very inspiring.
Posted by Zhana21 at 12:46 PM

i was in tears with this documentry, an really praise all four of the celebritys for their compassion and for helping the people they stayed with...But i also think a big shame to comic relief for exploiting these people and letting filming of their lives take place with the intention of moving them all out or getting to work on sorting out the living conditions i.e the open sewrage which was discusting for even an animal to live in let alone a human being. i will admire forever all the celebreties that took part and will think of those people in the slims as long as i live .

i really was so upset by this documentry, the celebs did a fantastic job with so much compassion ., lenney henry had so much to give and didnt care if he broke the rules, each person had a heart and helped so much..this documentry will stay with me for the rest of my life. I myself will not take anything for granted ,like we all do ..i just hope comic reliefs aim is to close down these slums and let people live in good conditions , so the children will live longer,,my heart goes out to all the people who live in these conditions ..

BEVERLEY
It was very touching to watch how all the celebs lived & mixed with the locals. I felt so sorry for Daniel & his family & was pleased when Lenny helped them out!! I hope they show an update on them next year.
I think I feel sorry for the next family/person to live in Daniel's old pad. They won't have a celeb & tv crew to give them any hope of help.......

Thanks very much for your xomment, Beverley.