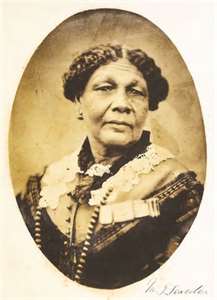 It is so important that we tell our own stories.

An event I attended on Saturday, held by London Black History Walks, examined the controversy.

The national curriculum only briefly mentioned Mary Seacole, as a Victorian woman who could be studied. The Daily Mail recently claimed that Mary Seacole's story was a myth.  See below for more details.

The following information was supplied by Professor Elizabeth Anionwu at this event.

Mary Seacole was a 19th century Jamaican businesswoman who worked as a doctoress. She saved many lives during outbreaks of cholera and yellow fever in Jamaica and Panama.

Seacole treated Lord Nelson and the future King William IV, both of whom highly praised and recommended her.

When she learned that Florence Nightingale was recruiting nurses to serve the wounded soldiers in the Crimean War, Seacole travelled to London, paying her own way. She approached Nightingale for help with finding accommodation in London.

Nightingale later wrote of Seacole as a “bad woman” who ran a “bad house”. The truth was that Mary Seacole raised the funds, went to the Crimea and treated the soldiers there. Her experience of tropical medicine greatly benefited them.

Nightingale has been remembered as the “Lady with the Lamp”, but the truth is that it was Mary Seacole who went to the battlefield to treat and comfort the soldiers. Nightingalle's hospital was across the sea, in Scutari.

Mary Seacole was well loved in her lifetime, frequently appearing in the newspapers. She was later forgotten, but the current generation have revived her memory and voted her the Greatest Black Briton on Patrick Vernon's 100 Great Black Britons site.

The Daily Mail claimed that
Read her autobiography to find out the truth.  Click here for an article about Mary Seacole by ProfessorAnionwu on the Operation Black Vote website.

Professor Anionwu is helping to raise funds for the erection of a statue of Mary Seacole.

Although we have a great deal of information and documentation about Mary Seacole, a national newspaper was able to publish these distortions. It is so important that we tell our own stories.

Please come to my next Griot Workshop to learn more about telling our own stories.