Fire in the Blood Documentary 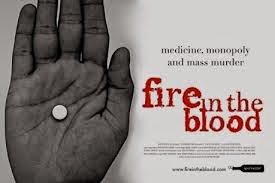 Fire in the Blood is the true story of how the pharmaceuticals companies conspired to stop people in Africa and other parts of the world from having access to affordable HIV meds.

The key word here is "affordable".

I saw this documentary a couple of years ago, but it has taken me until now to blog about it, because it upset me so much.  It is a very disturbing film.

As we know, the HIV virus mutates and people have to change their meds every few years, to get hold of the most up-to-date and effective meds.

Drugs laboratories in India were producing generic versions of popular meds and selling them in many different markets, including the United States.  This had been going on for many years.

But when they started producing HIV meds, this was seen as a problem.  Some of the major pharmaceuticals companies, which were producing their own brands of AIDS and HIV meds, conspired to stop them from producing meds which would be affordable in places where people, and governments, have limited funds for purchasing meds.

So a lot of people in African countries, Latin American countries and others were prevented from getting hold of these meds at affordable prices.  This has been called "genocide".

Fire in the Blood breaks it down.  It shows exactly what was done and how the U.S. government conspired with the pharmaceuticals companies.

This is not an easy film to watch, and it does not have a happy ending.

Although pharmaceuticals have saved millions of lives, and are continuing to do so, we also need to use other methods.
Posted by Zhana21 at 9:00 AM

Well said, Zhana. Do you see such a thing happening with the recent Ebola crisis as well?

Thanks for your comment. Of course, this could happen again, if effective treatments for Ebola were developed. What has been done is shameful, and I believe Black History Studies are holding an event about this subject this week.