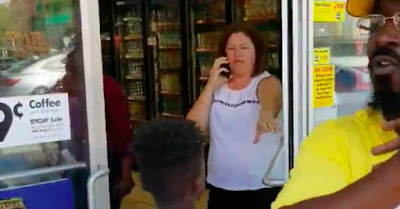 Shopping While Black News:  A white woman has called the police on 911 when a group of Black/African American anti-violence protesters stopped to buy drinks at a gas station.

In yet another instance of racist stupidity, the white woman, identified as "Brenda", called the cops when a group of anti-violence protesters, many of them children, ended their demonstration outside a gas (petrol) station in North Charleston, South Carolina.  The demonstrators planned to buy drinks for the children there.  Let's hope they did not spend any money at the gas station.

As far as I am aware, the demonstrators were not arrested, as were several people in two different Starbucks several months ago.

Go here for more blog posts from the Blogging Carnival for Nonviolence.

Please leave your comments below, and please share this with your networks.  Thanks.