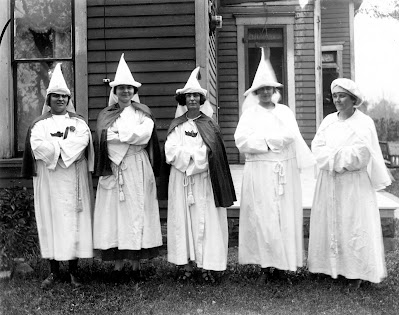 I don't often blog specifically about white supremacy, as I think it is important to focus on the positive.  However, white supremacy is all around us - and inside of us - and we need to understand it.

This is a very interesting article about white women's role in white supremacy, both historic and current.  White women were among the architects of white supremacy.  Until they won the right to vote, white women's main economic power came through their ability to own, buy and sell enslaved African people.

After the Civil War, white women joined, and were active in, the Ku Klux Klan.  And, of course, Birth of a Nation contributed to the mythology of the Klan as a necessary protection of white women from Black men who were keen, and naturally inclined, to attack them sexually.  In the film Freedom Riders, some of the participants speak of the involvement of white women in assaulting the riders.

According to this article, white women also played an active role in the recent storming of the Capitol building, in which five people died, and they are active, and play key roles, in white supremacist organisations.

What are your thoughts about the role of white women in white supremacy?  Please leave your comments below and please share this with your networks.  Thanks.