Zhana in Conversation with Lama Rangdrol 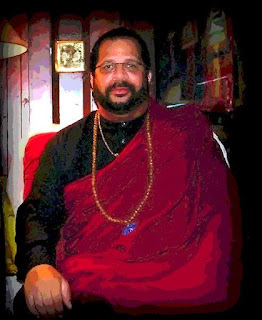 Lama Rangdrol is one of just a handful of Black/African American Tibetan lamas.  In his film, Festival Cancelled due to  Heavy Rain (see below), he speaks about growing up in the 'hood during the 1960s, where as a young Black man he was hunted, and  his pilgrimage to Cambodia, where, at Angkor Wat, he found ancient African images that remain undamaged.

The tiny Buddhist country of Cambodia was heavily bombed during the Vietnam War - a war in which the front line was called "Soulville" because there were so many young Black men fighting there.

I was very privileged to speak with Lama Rangdrol, and he explained more here.

Lama Rangdrol and his friends in the U.S., young Black men and women, faced a long list of seemingly insurmountable problems in what he terms the "urban killing zone".  He managed to escape; his friends all ended up dead or incarcerated.

What are your thoughts?  How long have young Black men been hunted by the police?  And why?  Please leave your answers below and please share this with your networks.  Thanks.

Go here for readings from the Blogging Carnival for Nonviolence.

Go here for more from the Blogging Carnival for Nonviolence 2021.