October 2021 marks ten years of the Black Cinema Club (BCC 10).  In honour of the tenth anniversary of their screening of Black films from Africa, the Caribbean, the United States, Britain and Europe, they are showing a whole programme of Black films.

All of these screenings are being held online, so you can join us and enjoy them wherever you are in the world.  See you there!  BCC 10 presents:

Filmmaker Alex Gibney uses period interviews and performances plus highlights of the Broadway production of `Fela!' to tell the story of Afrobeat music pioneer Fela Kuti.

Three old friends -- Mike (Omar Epps), Roland (Taye Diggs) and Slim (Richard T. Jones) -- recount memories of their shared childhood in Inglewood, Calif., as they prepare for Roland's wedding to his fiancée, Lisa (LisaRaye). When the groom goes missing without a word, Mike and Slim struggle to find their nervous friend and return him to his impatient bride before the wedding begins. Along the way, they continue to swap stories about lessons learned during their awkward teenage years.

This documentary film about the untold history of the Haitian Revolution was produced by the creator of the best-selling Hidden Colors film series.  1804 goes in-depth about the four principal players who were instrumental in Haiti's independence: Makandal, Dutty Bookman, Toussaint Louvature, and Jean-Jacques Dessalines. This documentary gives a compelling look into the strategies, the motivation and the mindset that led to Haiti being the only enslaved  population who successfully overthrew their oppressors.

Tuesday 5th October:  I Ain't Scared of You, a Tribute to Bernie Mac.

Friday 8th October:   Summer of Soul, or When the Revolution Could Not Be Televised.

Saw this one a few weeks ago, and it is definitely worth watching again.  In the summer of 1965, a whole lot of talented Black people performed for FREE in NYC.  The lineup included Stevie Wonder (on drums!), Gladys Knight and the Pips, Sly and the Family Stone, Nina Simone and many more.  Be there!

A model (Oyafunmike Ogunlano) on a photo shoot in Ghana encounters an old mystic (Kofi Ghanaba) who transports her into the past, where she becomes a slave.

Isiah is an up-and-coming painter under the tutelage of Yusef Davis, hoping to impress Chenai Hungwe to potentially launch his career. However, upon meeting Stevie Richmond, a friend of his boy Nick’s girlfriend Mecca, he gets a little distracted. Yet, as Yusef told him, you have to live to find your muse, and with Stevie, Isaiah does live. But with Stevie being a prominent up-and-coming lawyer, soon to finish school, and getting offers across the United States, while both have made time for each other in DC, will their relationship survive when distance adds an additional strain to it?

Hidden Colors is a documentary about the real and untold history of people of color around the globe. This film discusses some of the reasons the contributions of African and aboriginal people have been left out of the pages of history. Traveling around the country, the film features scholars, historians, and social commentators who uncovered such amazing facts about things such as: The original image of Christ; The true story about the Moors; The original people of Asia; The great west African empires; The presence of Africans in America before Columbus; The real reason slavery was ended And much more. 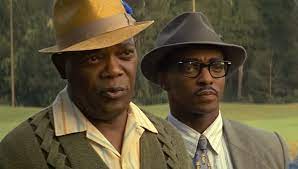 Samuel L. Jackson stars in this true story about two men who decided to open a bank in Georgia in the 1950s, when Black people were not even allowed to set foot inside a bank.

Revolutionary businessmen Bernard Garrett (Anthony Mackie) and Joe Morris (Samuel L. Jackson) devise an audacious and risky plan to take on the racist establishment of the 1960s by helping other African Americans pursue the American dream. Along with Garrett's wife Eunice (Nia Long), they train a working class white man, Matt Steiner (Nicholas Hoult), to pose as the rich and privileged face of their burgeoning real estate and banking empire - while Garrett and Morris pose as a janitor and a chauffeur.

It's been so many years since I've seen this charming, delightful film from Euzhan Palcy.

In the French colony of Martinique in the 1930s, rambunctious teenager Jose (Garry Cadenat) lives in a rundown shack in a small farm village with his doting grandmother, M'Man Tine (Darling Legitimus). While studying diligently at the local school, Jose also learns at the side of wise village elder Medouze (Douta Seck), who tells him first-hand of the lives of African slaves. When Jose wins a scholarship to a prestigious high school in the capital, he brings the wisdom of the village with him.

Thursday 21st October:  Out of Darkness.

Out of Darkness explores the Nubian/Kushitic origins of Nile Valley Civilization, contact between Africa and the Americas since the times of antiquity, as well as the influence of the Moors in Europe leading to intellectual Renaissance. In addition, the film will analyze the history of modern day racism, the concept of "white supremacy," the impact of Hip Hop as a social movement, and the idea of nationhood.

There are more which have not listed here.  Check out BCC 10 for details.

What's your favourite Black film?  Or what are your top 10?  Please comment below and please share this with your networks.