Black Success: Do You Play the Lottery? 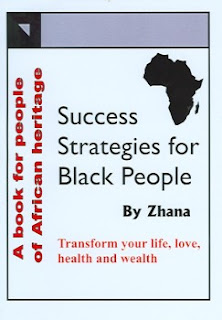 I was recently interviewed by Denise Turney on her Off the Shelf show.  If you haven't had the chance to listen yet, please do click here to listen to the interview.   I had a delightful time.

One of the things we talked about was how people of African heritage often seem to be waiting for someone else to come along and sort out our problems for us.  Have a listen to the short audio below, see what you think.

If you enjoy this and find it useful, please share it with your networks.  Thanks.

Wishing you every success!


Listen to internet radio with Zhana21 on Blog Talk Radio
Posted by Zhana21 at 2:05 PM No comments:

Manifestation - Manifest What You Want

I had a delightful radio interview with Denise Turney of Off the Shelf on Saturday.  I greatly enjoyed it because Denise was so warm and so knowledgeable.  Please listen to the interview below.

If you enjoy it and find it useful, please share this interview with your networks.

The one thing I forgot to mention when Denise asked me about my ebooks The Key to Everything and What They Don't Want Us to Know was manifestation.  I'm sorry to say I drew a blank - has that ever happened to you?

I am brilliant at manifesting.  Click here for info about what I have manifested in my life - so far - and how you can do it, too.

Lest We Forget: The Haitian Revolution

Lest we forget, the 23rd of August is African Remembrance Day, marking the day when enslaved Africans on the island of Haiti rose up against their oppressors and freed themselves.

However, a treaty signed by Haiti required them to pay reparations to their former masters, which has led to the impoverishment of people in what was once the most prosperous island in the Caribbean.  The devastation of the Haiti earthquake in early 2010 was greatly compounded by the impoverishment of the population and the lack of resources in Haiti.

When you change your thoughts, feelings and emotions, you can change your results.  I have practical methods to help you do this. For more information, listen to this short audio.

Using EFT to help survivors of the Rwandan genocide

Why Positive Thinking Can Be a Negative Thing

Why We Need to Heal

I saw a documentary entitled "The Promised Ship" last night, screened by Black History Studies.  Did you know that Marcus Garvey raised $50,000 for the Black Star Line in three days?  This was from poor banana-growing communities in Costa Rica in the early 1920s.

Check out the video below for more info.

What does this tell us about the potential of Black-owned businesses today?  Remember, Garvey did this without the internet, without mobile phones, without any of the modern methods of mass communication that we have available.

Black businesses potentially have enormous economic clout.  I have been talking about this on the radio and we will continue to talk about this.  See also:  Black Businesses:  Our Economic Clout.

Stay tuned for Part 2 on the subject of our economic clout.

Black Enterprise has identified London's top Black men and women of power.  Not sure I agree with their choices.

It's great to see writer Courttia Newland included in the list of London's Top Black Men of Power.

In Black Success Stories, I did not just list people's accomplishments.  I asked them how they achieved their successes.  It's all there in the book.

You May Be on the Verge of a Breakthrough

You need to have that breakthrough.  You deserve to have it.  And you can have it.  Listen to this audio to find out more.

Listen to internet radio with Zhana21 on Blog Talk Radio
Black business owners potentially have enormous economic clout.  How can we harness this power and use it to benefit our businesses and our communities?

Listen to the audio above to hear my conversation with Heather Shelton on how they are doing it in St. Louis, Mo.

Wherever you are in the world, your customers are looking for you.  Click here for more about our international advetrtising. This has huge potential for us.


You have this amazing energy sparkling away inside of you.  Listen to the audio above to find out more.

Click here for a blog on how the Higher Self and SRT is helping people to be free from Alzheimer's and dementia.