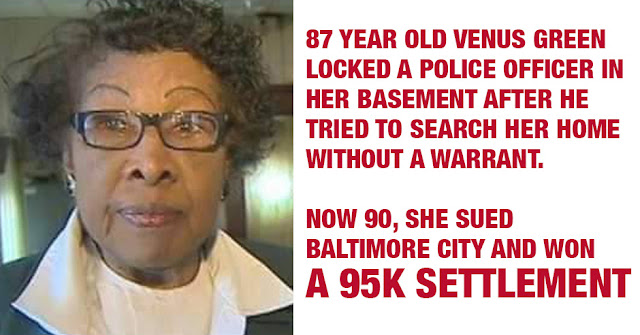 This is the kind of news story I like to see.  87-Year-Old Venus Green Locks Police Officer in Her Basement ... and wins a $95,000 settement!

How's that for some news you can use?

Seems the police officer forced his way into her home on a pretence and sarted pushig her around.  Meanwhile, her grandson, Tallie, had been shot in a convenience store and the police officer was preventing the medics from helping him.

Rather than stand by and allow Tallie to become another statistic, Venus took matters into her own hands and locked the officer in the basement!

This story just keeps getting better.  Green then sued the City of Baltimore and won - they paid her $95,000 compensation . Go Venus!

Click here to read the article on Urban Intellectuals.  .

Please share this with your networks and please leave your comments below.  Thanks.
Posted by Zhana21 at 9:00 AM No comments:

Black Lives Matter: Finding Peace with the Higher Self

I am posting this in the aftermath of a week that saw two African American men killed by the police, and a number of police officers in Dallas killed by snipers.

Here in Britain, where 590 Black people have been killed by the police, the perpetrators are not even arrested, charged or brought to trial.


We need to find solutions that are going to work for ourselves, for our families and for our communities.

Listen below.  Please share this with your networks and please leave your comments below.  Thanks.

For more about the Higher Self, see:

How to Get Clear, Precise Answers

We Need Solutions That Work

Go here for the Blogging Carnival for Nonviolence and interviews with NVC authors.
Posted by Zhana21 at 12:36 PM No comments:

Today marks the centenary of the first day of the Battle of the Somme. Growing up in the States, I didn’t know much about the First World War. I had never heard the names of the great battles such as Verdun, Gallipoli, Passchendaele and, of course, The Somme. I learned a lot of detailed information when I moved to the UK.

This information was not taught when I was in school in the States, probably because we did not enter the war until 1917. So we missed out on The Somme, although our men experienced the final two years of the conflict.

World War I is remembered for the senseless slaughter of the combatants. The battle of The Somme went on for 141 days and saw the deaths of a million soldiers on all sides of the conflict. Young men were sent to their deaths by generals who either were incompetent or just did not care about the lives being squandered – or possibly both.

World War I was a new kind of war, relying on trench warfare and heavy artillery. The doctors and nurses who treated the wounded saw types of wounds they had never witnessed before. And the killing was on a scale that had never occurred before.

It is important that we remember The Somme and the men and women who gave their lives during the war. Many of them came from Africa, the Caribbean and India.

I was not aware of the horrendous conditions in which Black soldiers who served in the British Army lived. For example, in France, the African Caribbean soldiers in the British Army slept in unheated tents, while captured German enemy soldiers were given heated accommodation in barracks. For more about this, see Black People in the First World War. Many men joined up in the naive belief that serving in the army, and "proving themselves" would lead to them experiencing less racism and racial discrimination at home.

World War One was meant to be the war to end wars, but if we look at the conflicts in places such as Iraq, Syria, Afghanistan and northern Nigeria today, it is clear that war is still alive and well.

I was aware that the First World War ushered in a period of great change for many African Americans. Many of the men who had served in the war and experienced being treated as equals – for example, being allowed to sit and drink in cafés in France, something we all take for granted today – returned home to the States expecting and demanding equal treatment. This was one factor that contributed to the epidemic of lynchings in the South that began in 1919 and, of course, led to many African Americans migrating North. So the First World War had a huge impact on the lives of Black people all over the world.

I have a lifelong commitment to nonviolence. We must end violence and put an end to these conflicts that are still destroying the lives of millions today.

The images above were taken from World War I and the African American experience.